Thousands of Duke Energy customers in Salisbury and eastern Rowan County were without power for parts of Sunday afternoon and Monday morning following two outages that are still under investigation.

Due to an equipment failure, several downed power lines caused roughly 1,700 residents between Bringle Ferry and Stokes Ferry roads to lose power around 2:15 p.m. on Sunday. As Duke Energy crews worked to remedy the outage, an additional 2,500 customers in the area lost power a little over an hour later. Most customers saw their power restored around 5:30 p.m., but a few outages lasted closer to 6 p.m.

“The outage was concentrated to a single zip code in Bloomington, 61704. The company outage map said 4,144 were in the dark, crews are working to diagnose the problem at one of their substations in the area.

“The Indiana Michigan Power Outage Map indicates that 3,770 people on the south side of South Bend lost power. All of these outages are in communities near Erskine Park and Riley High School.

“Severe weather leaves hundreds without power in Northern Minnesota. over 1,700 members are without power. The main impacted areas are just North of Orr, in the area of Lake Vermillion, which is near Tower and in Ely. No word on when power will be restored to these... See More areas.

“round 4,000 El Paso Electric customers lost power Friday evening amidst severe thunderstorms rolling through the region. The scattered power outages in the region spread from west El Paso up along I-10 through Anthony and onward to Las Cruces, which utility officials said was the top area... See More impacted. There was no estimation as to when electrical service would resum

“Over 1,600 customers with Southern California Edison (SCE) were left without electricity Friday afternoon. Residents in Canyon Country near Soledad Canyon Road and Golden Valley Road reported a loss of power.

“More than one thousand El Paso electric customers have reported power outages across the Borderland, The outages were reported following heavy rainfall, winds and the potential for hail.

“Thousands without power, dozens of power lines and trees down and damage across Southern Arizona as a powerful monsoon storm ripped through.

“Power knocked out at Salisbury Beach

“An employee was exposed to COVID-19 and was told to continue to come into work. The employee now has a positive test for the virus. The employer did not inform any employees or follow the proper protocol to quarantine and other employees have now been exposed.

“According to the City of New Bern Department of Public Utilities, 138 customers are affected by this outage near Dr. M.L.K. Jr. Blvd. and Chattawka Ln.

Long-term ingestion of N-nitroso-varenicline may be associated with a theoretical potential increased cancer risk in humans, but there is no immediate risk to patients taking this medication. The health benefits of stopping smoking outweigh the theoretical potential cancer risk from the nitrosamine impurity in varenicline. Nitrosamines are common in water and foods, including cured and grilled meats, dairy products and vegetables. Everyone is exposed to some level of nitrosamines. These impurities may increase the risk of cancer if people are exposed to them above acceptable levels over long periods of time.

Chantix is a treatment to help patients quit smoking and is intended for short term use. People who smoke cigarettes are 15 to 30 times more likely to get lung cancer than people who do not smoke. Smoking is also associated with many other cancers. CHANTIX has a safety profile that has been established over 15 years of marketing authorization and through a robust clinical program. Pfizer believes the benefit/risk profile of CHANTIX remains positive. Patients currently taking Chantix should consult with their doctor to confirm if they received an affected lot, and if appropriate, about alternative treatment options.

To date, Pfizer has not received any reports of adverse events that have been related to this recall.

The product lots were distributed nationwide to wholesalers and Distributors in the United States and Puerto Rico from June 2019 to June 2021. 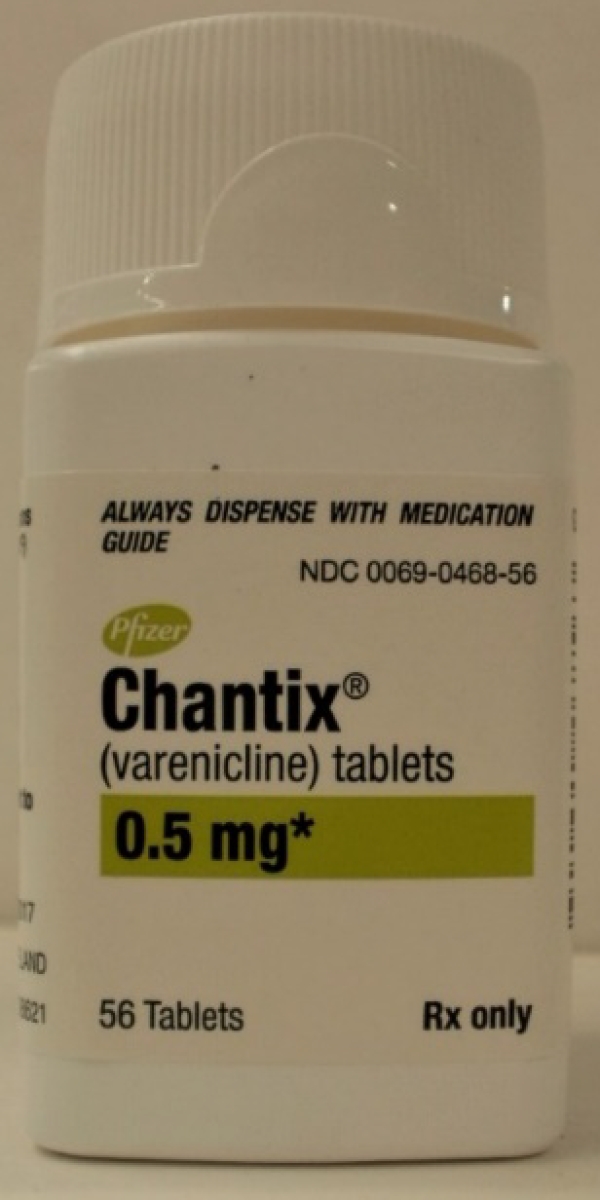 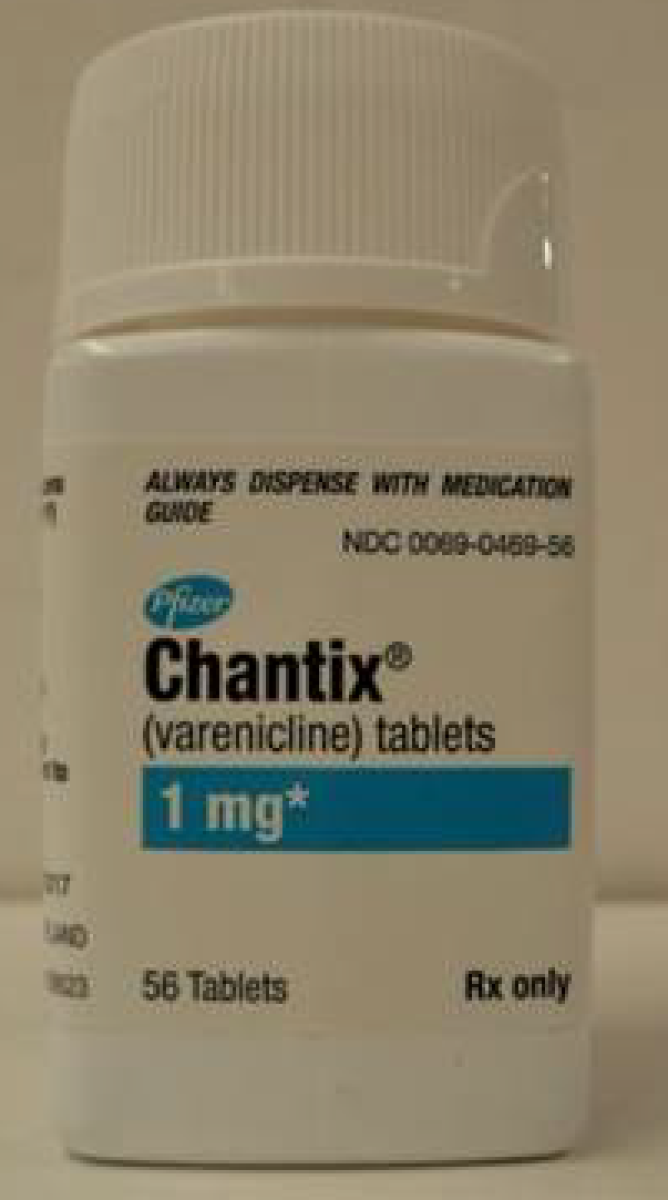 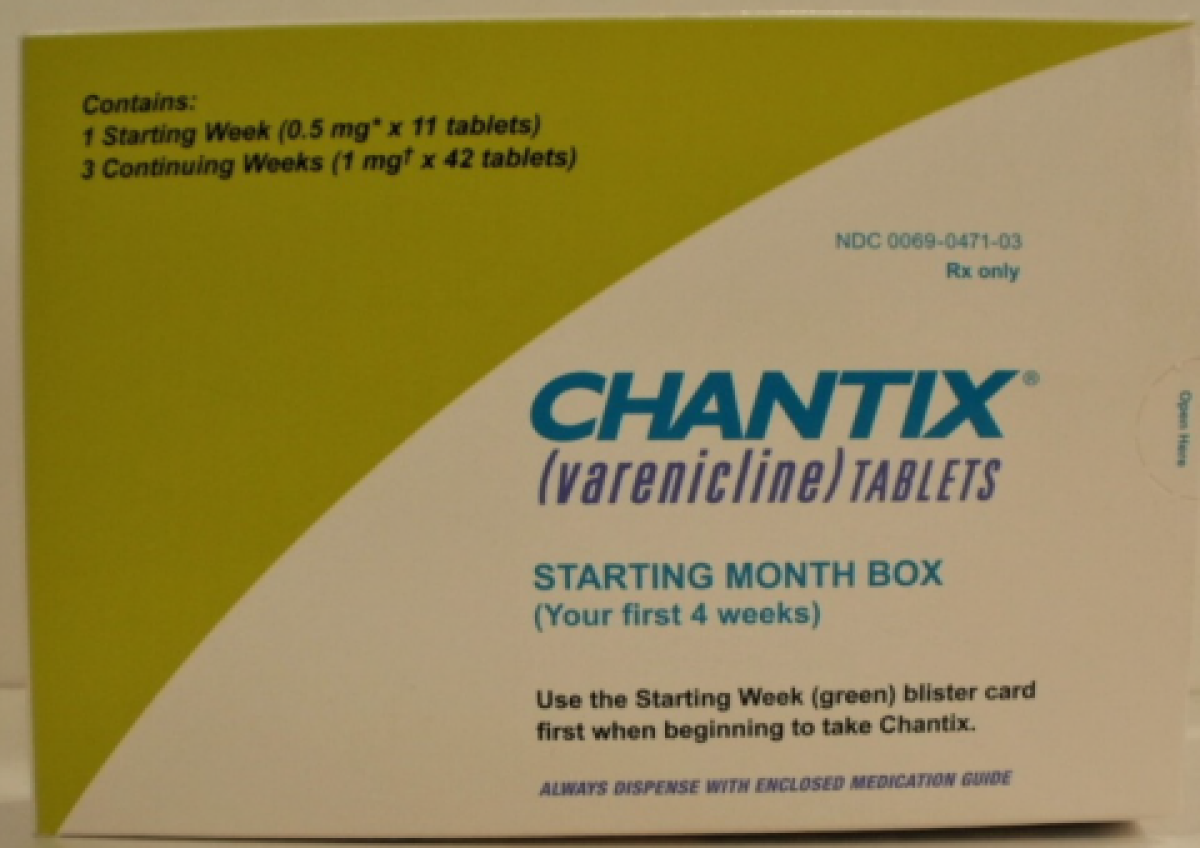 “Yesterday I bought and gave my dog two dream one twist dog treats. A couple hours later he was acting sick. Head down, not himself. He's a very energetic blue Lacy so this is unlike him. Yesterday evening I noticed he was trying to poo but couldn't.... See More He refused his normal treats (not the dream bone but he gets blue buffalo bits after potty breaks) this was another red flag . My boy never turns down a treat.
All last night he was restless. It's now 10 am on the day after giving him the dream bone twists. He's still restless, can't get comfy, lays down then stands up then sits down with his head down. Won't eat, even things he normally loves. I've rubbed his belly and tried to comfort him. I let him out and walked him around a bit to try and help his bowels move along. Still nothing. He ate a bit of grass which is normal when dogs don't feel good. A bit later he started puking a massive amount and I could see alot of undigested dream bone in it. Those dream bones are the only new thing hes had and now he's really sick. I'm scared after reading about other law suites and issues regarding this product that my dog might have obstructed bowels from eating eat. I'm watching him closely and ready to take him to the vet as soon as I see if he's going to improve after puking or not. Vet visits are really expensive and if he needs surgery or declines further I'm going to raise hell. It's not okay for money hungry corporates to line their pockets while falsely advertising its products as safe knowing dam well it's killing beloved animals. My dog deserved a treat not a fight for his life. See Less” 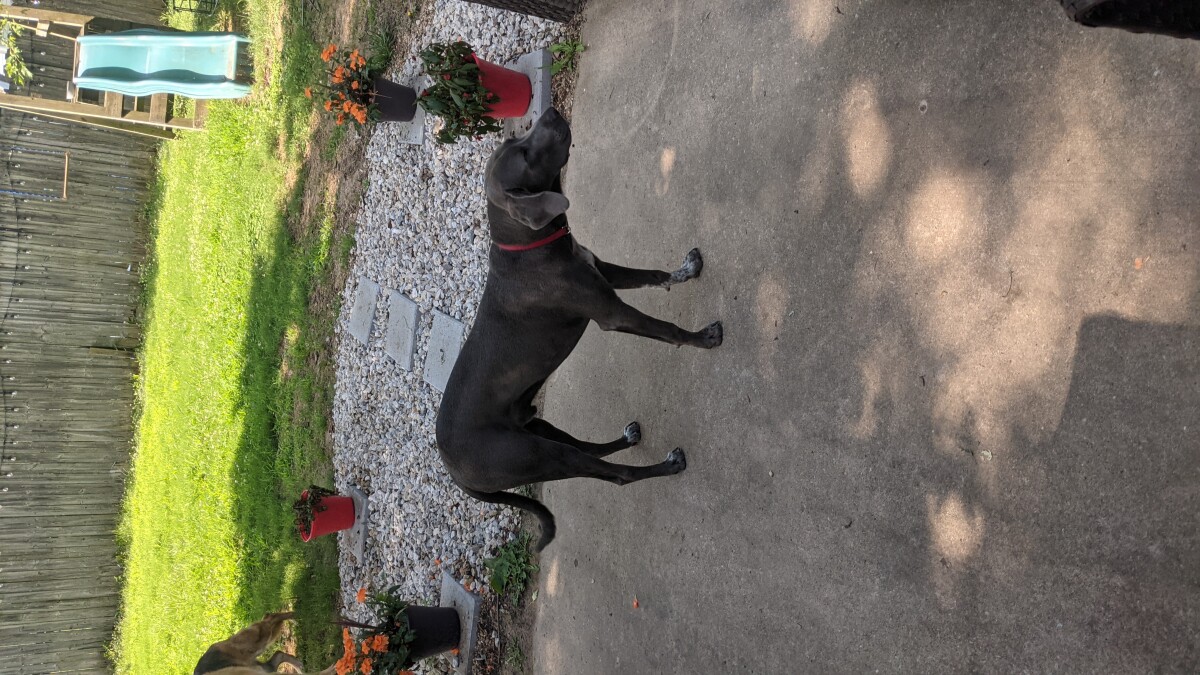 “I ordered the hand-held battery operated chainsaw from Amphitrite Technology Limited on Facebook, but what I received was a hand-held chain. No saw was delivered. This company is a SCAM. Do not order anything from them. See Less” 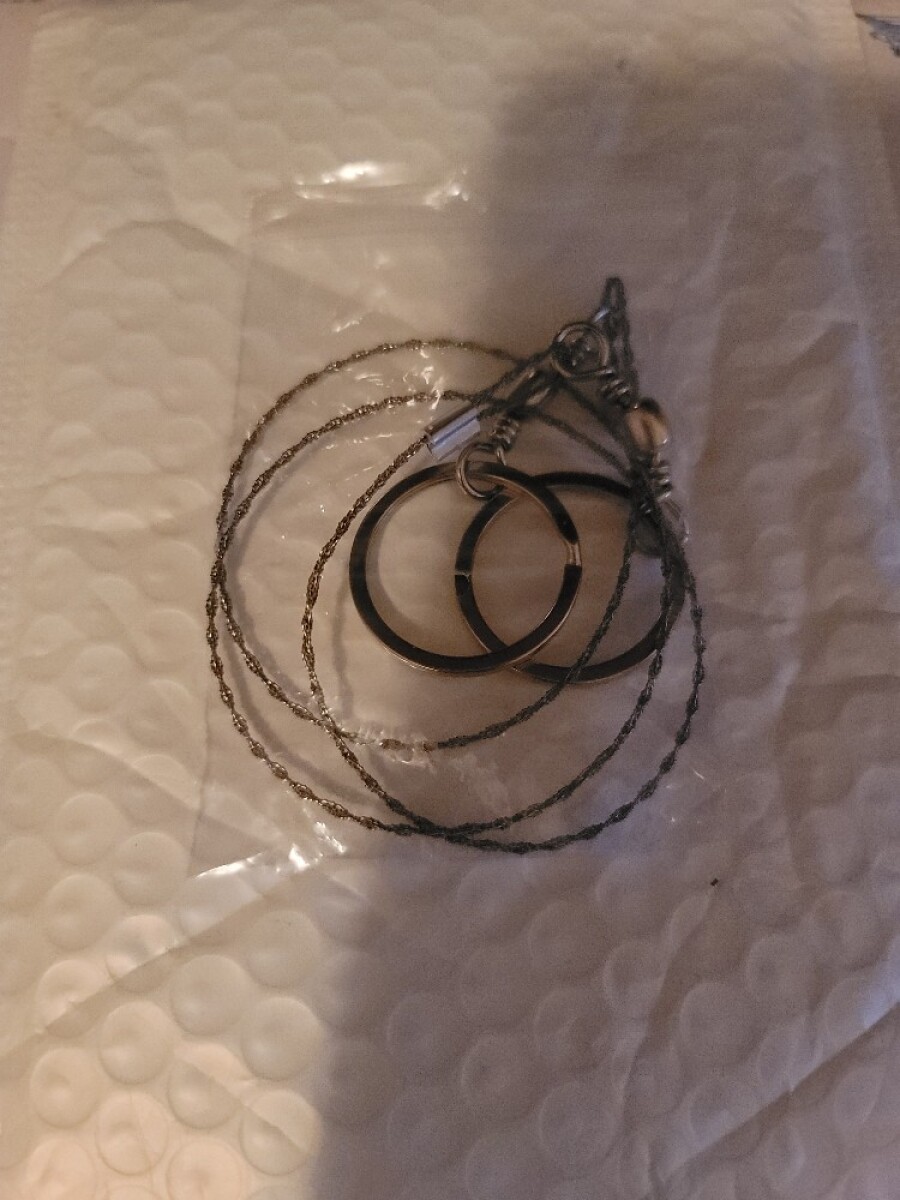 “I ordered the small power handsaw for 19.99 on Facebook on May 13, 2021, and as of present day, I have not received the merchandise that I purchased. I recently been seeing the ad on fb market place for the same power handsaw, but now they are... See More asking for 14.99. Please remove these people or flag them for removal of this platform with a stiff penalty for consumer fraud. See Less”

(Pet owners) If you have bought any of the above products do not use them. Instead, return them to the store from where they were bought for a full refund. When handling and serving raw pet food it is always advised to clean utensils and feeding bowls thoroughly after use.

Consumers should wash hands thoroughly after handling raw pet food, bowls, utensils or after contact with the faeces of animals. Raw pet food should be stored separately from any food (especially ready to eat foods). Care should be taken when defrosting to avoid cross contamination of foods and surfaces.

In humans, symptoms caused by salmonella usually include fever, diarrhoea and abdominal cramps. Infected animals may not necessarily display signs of illness, but symptoms can include diarrhoea. 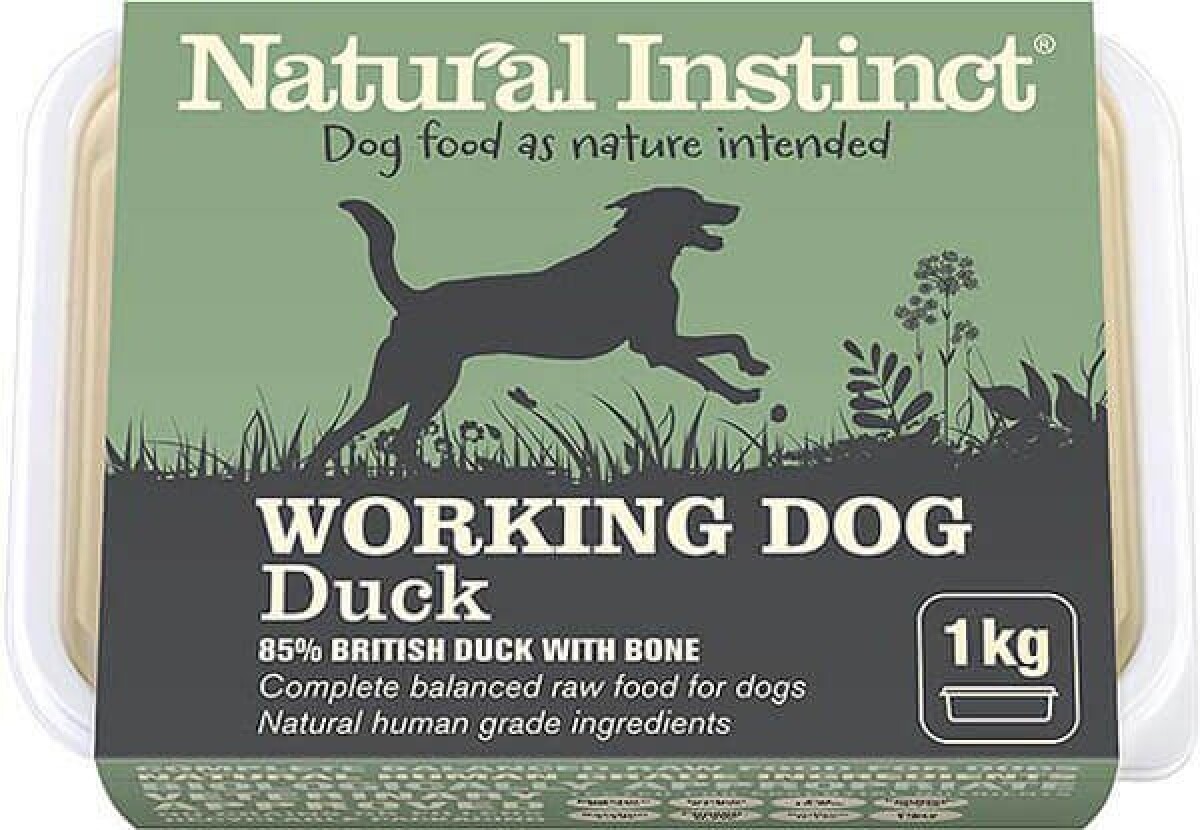 I want my money back they scammed me, Chino Hills, CA, USA

“I also ordered battery powered hand saw and got some weird hand saw thing a piece of wire with two circles at the end of the Wire, I want my money back they scamed me out of $23.99 See Less” 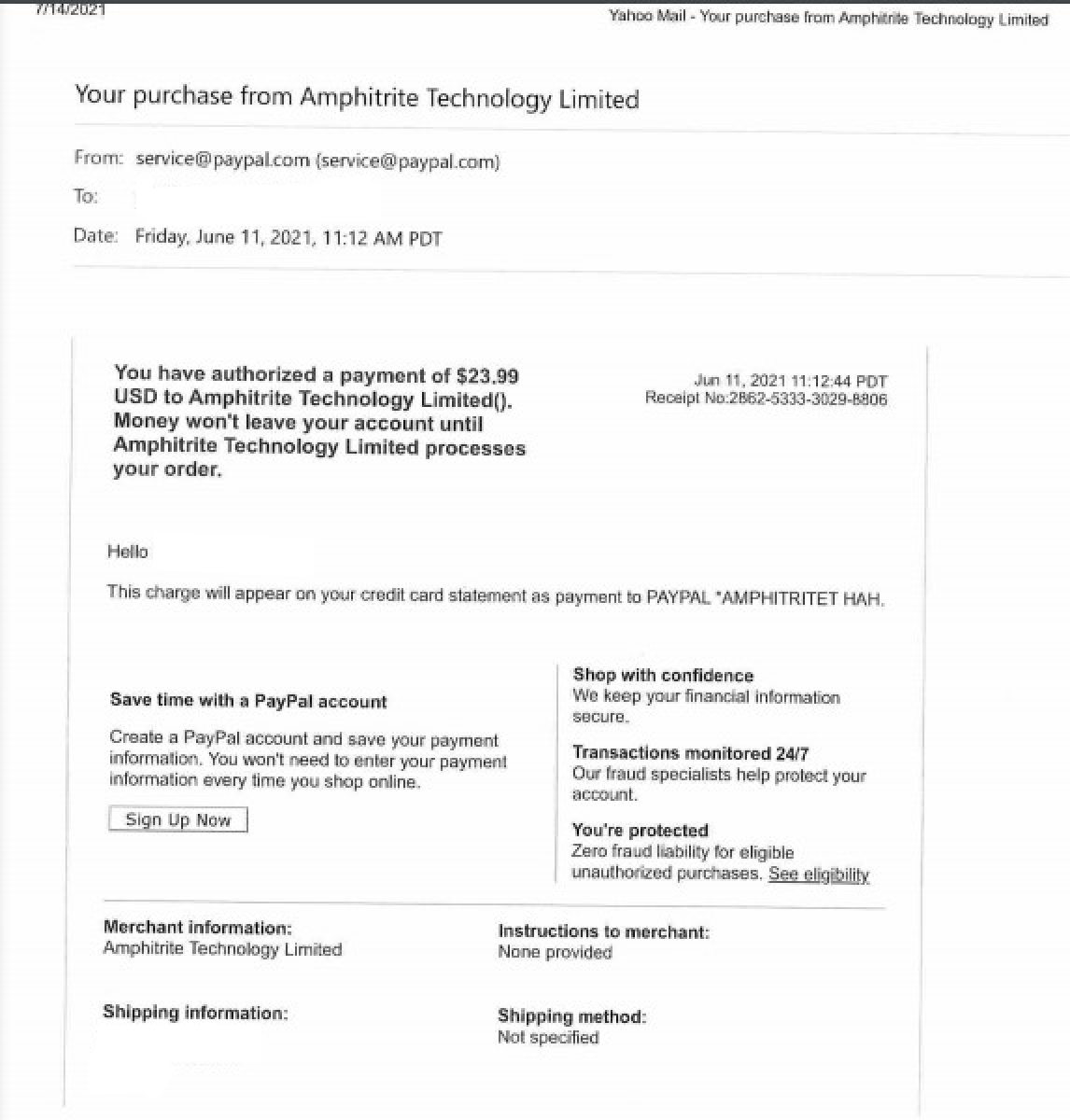 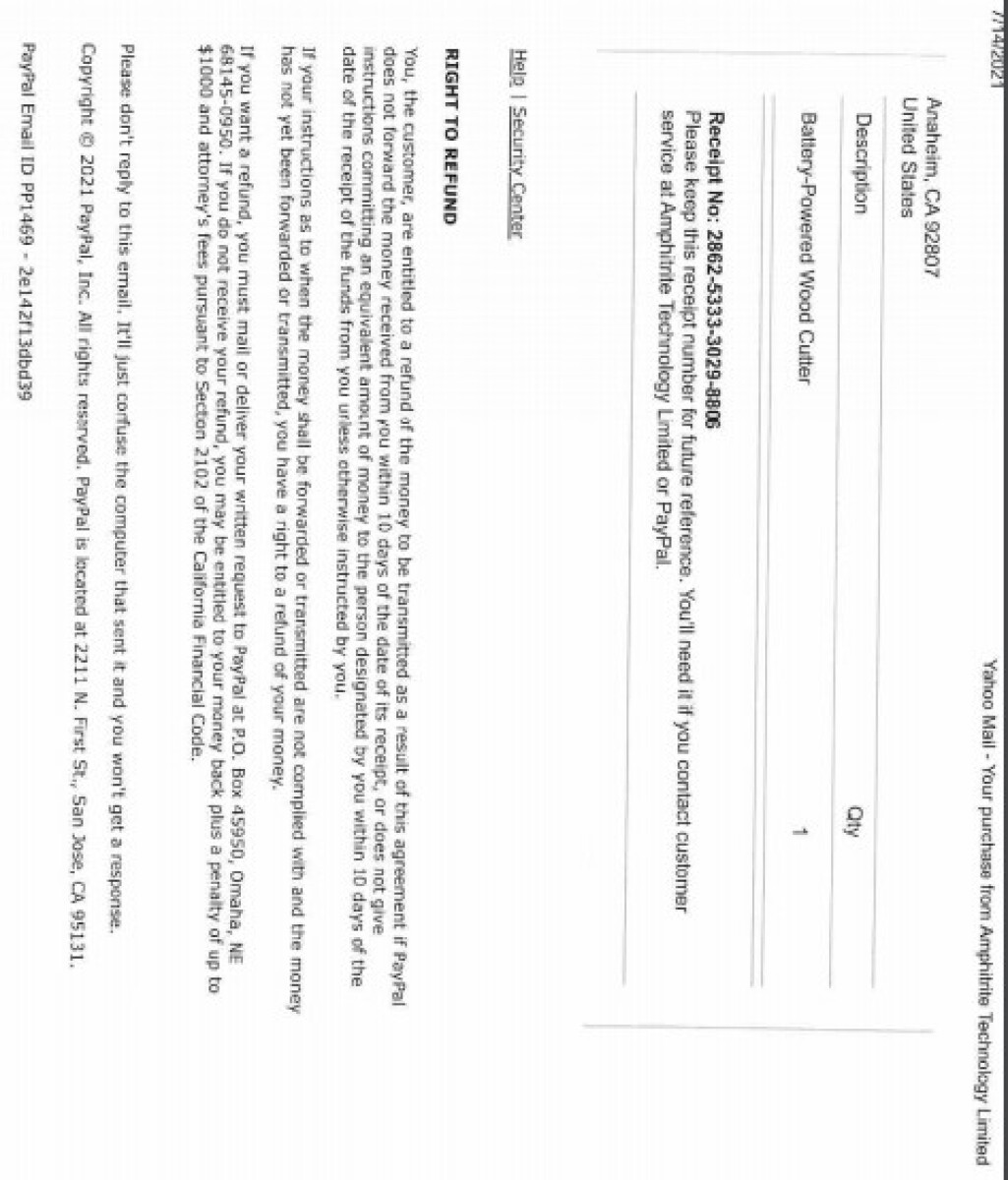 This is the second one I’ve ordered and have not receive, Billings, Montana, USA

“I ordered the Battery-Powered Wood Cutter, this is the second one I’ve ordered and have not received I either want my money back for 2 or I want them sent. On April 15th they shipped a Battery Powered WOOD CUTERR, I have not received it yet, plus... See More I ordered one before this, I would like to know where they are,  Aphitrite Technology limited See Less” 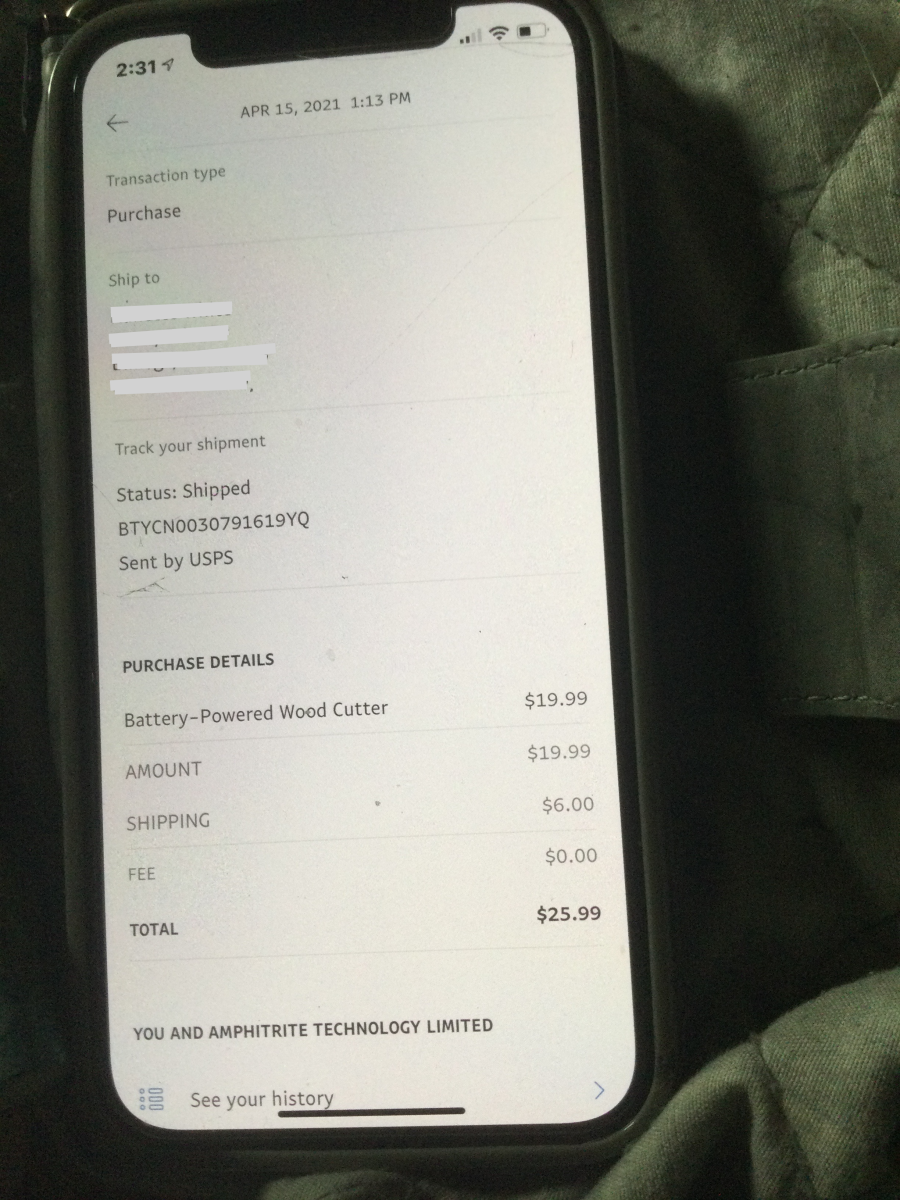 “Ordered hand chainsaw from them off Facebook. I got a weird metal string thing that I almost threw away because I nor anyone I asked knew what the hell it was. What a ripoff!!! I am trying to get my money back, but if they think for... See More one moment that I'm going to pay to have that piece of sh*t sent back to them, they better think again!! See Less” 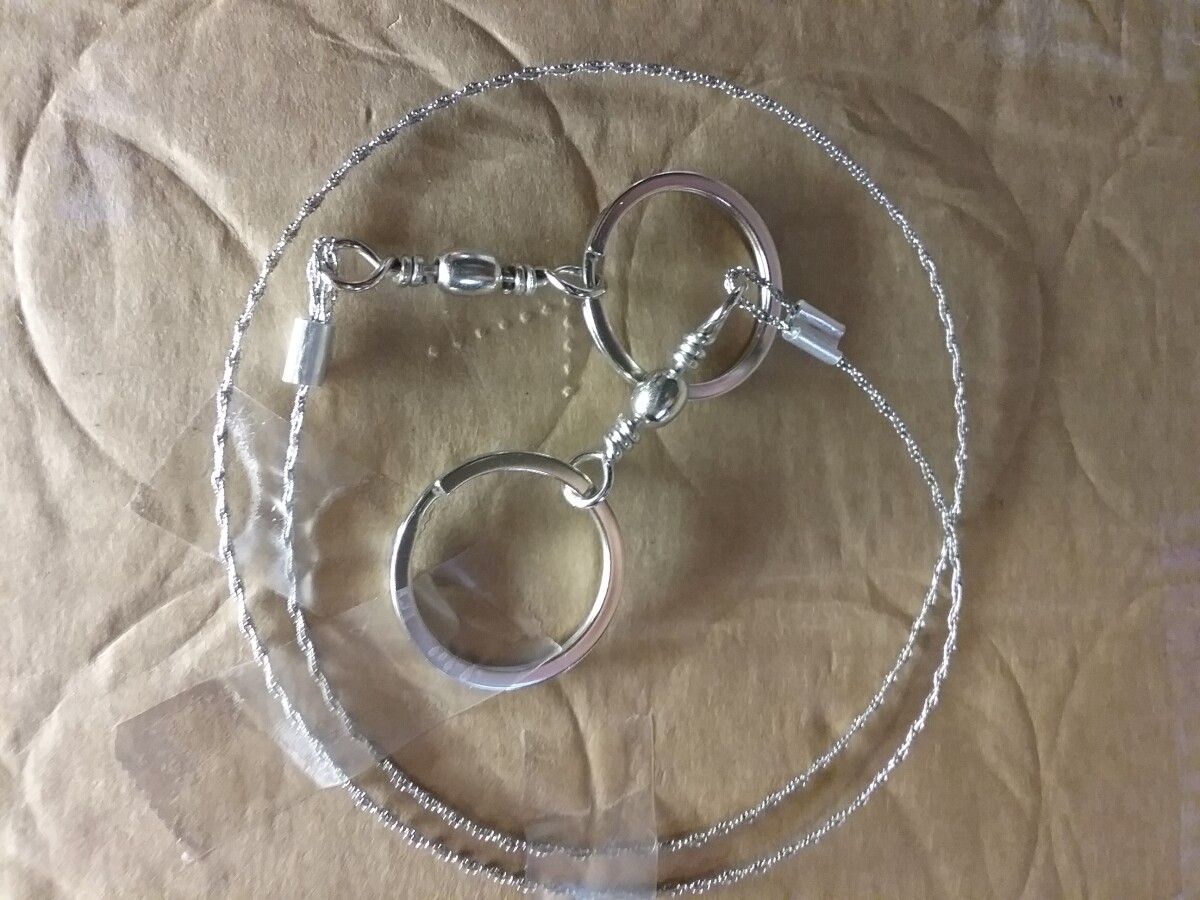 The product poses a risk of ingestion. Ingesting hand sanitizer, which is intended for topical use, could potentially result in alcohol toxicity. Symptoms of alcohol toxicity may range from lack of coordination, slowed or slurred speech, drowsiness to coma, which can be fatal. Furthermore, ingesting alcohol can affect the brain and cause impaired driving or operating heavy machinery. Alcohol can also interact with numerous drugs which may result in serious adverse effects. Ingesting alcohol by people with alcohol addiction may interfere with maintaining abstinence. Additionally, people with alcohol addiction may seek large amounts of ethanol-based hand sanitizers as a substitute.

To date, Ardil Comercial has not received any reports of adverse events related to this recall. The product is intended to be applied topically to help reduce bacteria on the skin that could cause diseases when soap and water are not available and is packaged in 4 oz bottles. under the brand Limar. The product can be identified by the bottle’s labels pictured below.  The affected product lots include the following lot number: 079932-4611-05-J with the following expiration date: May 2022. Hand Sanitizer 4 oz Limar was distributed nationwide to a distributor who may have further distributed nationwide in the USA.

Ardil Comercial is notifying its distributors and customers by telephone, press release and is arranging for a replacement of all recalled products. Consumers and distributors that have the product which is being recalled should return to place of purchase. Consumers should contact their physician or healthcare provider if they have experienced any problems that may be related to taking or using this drug product. This recall is being conducted with the knowledge of the U.S. Food and Drug Administration.

“Ordered chainsaw...like everyone else...got a piece of wire...after back and forth emails ...and after I told them I was going to report them for fraud..
The domain is no longer available returns as "no such domain " See Less”